Erika Gregory: Ah, nothing like a deadline to focus the mind!
So I agree with your note, Joe, but where I find images like this to be really useful is as theatrical backdrops for a "drama" we want to highlight in the foreground, which is nearer-in, more accessible (hence, for many people, more credible) strategic conversation. When we've done big installations, where we've had hundreds of people "touring" several alternative futures, a few of these images carefully placed have really helped to transport people outside the present just long enough to remember they're meant to think differently.

Joe T: I tend to have a weak spot for these type images as well, but I fear that they veer to close tothe utopian to be really valuable.

Nicole AB: Artists are still the best when it comes to captivating the human imagination. Both in pictures and moving ones. Jules Verne, Leonardo de Vinci (not the other one :), Matrix, Tolkein, Game of Thrones, Disney, Lucas -- you get the gist of this -- a best when balancing "whole brain" visuals (head, heart, gut, spirit) with a plausible story (enough newness but still the familiar) with a sense of magic and mystery (without overdoing it, so easily done). This picture, though not overtly a sustainability picture, gets at the latter for me which is often missing in many sustainability stills of the future 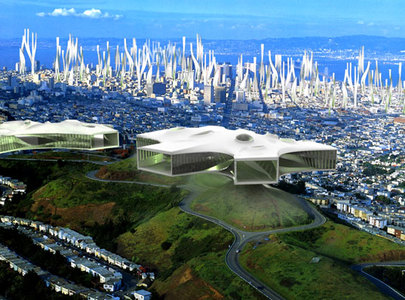 ﻿Comments:
Nicole: Again, part of this yet-to-be-named genre of sustainable future city depictions.
What I like about this: the focus on showing how we can take a perceived negative (fog) into a solution (water harvesting). What I don't like: hard to interact with these images. I want to zoom in and out. I want the iPad effect. I want a little Google Earth capabilities in the mix.

Erika: Aha, city as kelp bed.
This works for its blend of familiarity and novelty and the plausibility of such a future in this social context. I agree with Nicole's note about zoom-ability. And what I always wish for is the ability to get inside one of the structures and see exactly what's going on there... so I want more detail about the components of the image as well as the whole gestalt it represents.

SOURCE
http://inhabitat.com/san-francisco-in-2108-the-hydro-net-vision-of-future/
San Francisco is already one of the greenest cities in the US, but check out this wild new concept from IwamotoScott Architects to completely remake the city into an ecotopia by 2108.
The design, which is as visually stunning as it is thought-provoking, recently won the History Channel’s City of the Future competition. It’s a full-scale urban system that combines the most innovative green technologies with San Francisco’s unique microclimate and geologic conditions, to produce a compelling vision for the future. Hydro-Net, as the project is known, will bring the lovely city-by-the-bay (which many Inhabitants call home) squarely into the 22nd Century with algae-harvesting towers, geothermal energy ‘mushrooms’, and fog catchers which distill fresh water from San Francisco’s infamous fog.﻿